Often called “America’s best idea,” the creation of the world’s first national park at Yellowstone wasn’t intended to be a radical new idea by a young nation.

It was a practical solution to a territorial argument. It was supposed to become a state park, but the Yellowstone land was in three territories, none of them yet a state.

“There was an immediate argument between Montana and Wyoming newspapers about who would get the park,” Yellowstone National Park historian Lee Whittlesey said. “That is why Congress made it a federal park.”

Most members of Congress didn’t oppose the Yellowstone legislation because most people hadn’t seen the land, Whittlesey said.

“There was no railroad yet and no way to get there. It was incredibly difficult to reach the place,” Whittlesey said. “The opposition basically asked, ‘Can we farm it? Can we mine it? Oh, we can’t? Then we can get rid of it later if we don’t like it,’ ” he said.

The creation of other national parks and monuments soon followed, culminating in the creation of the National Park Service on August 25, 1916.

As the National Park Service celebrates its 100th anniversary this year, it now cares for 409 park sites spread over more than 84 million acres (131,250-plus square miles) in all 50 states, the District of Columbia and U.S. territories.

Visitors are flocking to the parks in record numbers, with more than 305 million visits during 2015, a 12 million visit increase over 2014, according to initial estimates.

It wasn’t always about preservation.

In the early days of the Republic, those beautiful natural resources were seen as raw materials by white explorers and settlers hoping to get rich. Conserving and preserving land for the benefit of the public good and future generations wasn’t on a young government’s agenda. 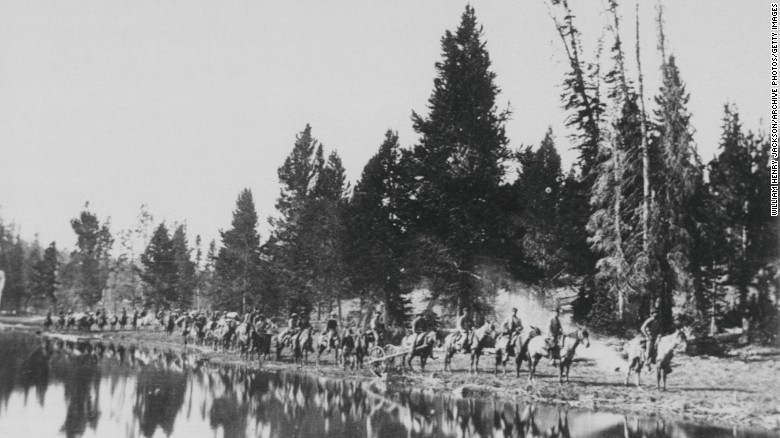 William Henry Jackson’s pictures of Ferdinand V. Hayden’s expedition to Yellowstone publicized the region’s beauty to a wide audience. this picture was taken at Mirror Lake en route to the East Fork of the Yellowstone River on August 24, 1871.

As people built cities, the idea of nature as spiritual refuge and antidote to bustling urban life began to emerge, thanks to the writings of Ralph Waldo Emerson, Henry David Thoreau and Sierra Club founder John Muir.

“Come to the woods, for here is rest,” wrote Muir, who worked and lived in Yosemite for part of his life.

“There is no repose like that of the green deep woods. Here grow the wallflower and the violet. The squirrel will come and sit upon your knee, the logcock will wake you in the morning. Sleep in forgetfulness of all ill. Of all the upness accessible to mortals, there is no upness comparable to the mountains.” 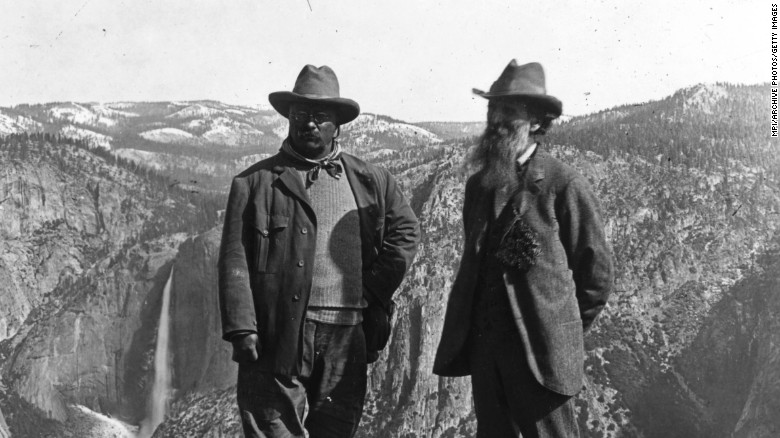 It didn’t matter that people couldn’t actually get to Yosemite or Yellowstone. Nor was there much concern that there were Native Americans living on the land.

The stunning beauty of these natural wonders was evident in the paintings by Fredrick Edwin Church, Thomas Cole and others, which were shared in the popular magazines and newspapers of the day.

“They popularized the idea of the beauty of America, as Western exploration continued, and we encountered these places out West, including the geysers of Yellowstone and the Grand Canyon,” said John Nagle, an environmental law professor at the University of Notre Dame.

Europe had its castles and culture

It was artist George Caitlin, who captured the American West in his paintings of Native Americans, who first suggested the idea of “a nation’s park” to protect Native American civilization, wilderness and wildlife from destruction in 1832, according to “The National Parks: Shaping the System.”

Though Caitlin’s concerns about Native American life were ignored, his suggestion to protect nature grew in popularity.

Some of that push came from a national insecurity. Europe had its castles and grand culture, a point of self-doubt for a young nation. The United States had mountains, enormous waterfalls, great sequoias and geysers beyond compare.

“Europe had millennia of cultural superiority which we couldn’t compete with, but we could with nature,” said Nagle. There was also the sense that “public lands are not just for settlement and development. There are some we want to conserve to preserve for the natural features that are there.”

And the exploitation of Niagara Falls was proving that private enterprise could not be trusted to protect it.

Although the U.S. side of the falls was a state park, the newspapers of the time reported that the commercialization of the park had become an embarrassment, Whittlesey said. The falls area was filled with concessionaires milking the natural beauty — and visitors — for everything they could. Europeans mocked the tourist spot.

A move to protect natural wonders

The first time a federal government moved to protect nature was with the Yosemite Land Grant of 1864, when President Abraham Lincoln and Congress set aside parts of Yosemite during the throes of the Civil War.

The land was given to the state of California and later became part of what would become the nation’s fifth official national park.

“Lincoln was in the middle of the Civil War — he had other things on his mind — but he said, ‘this is important,’ ” said Beth Pratt, head of the National Wildlife Federation’s California office. 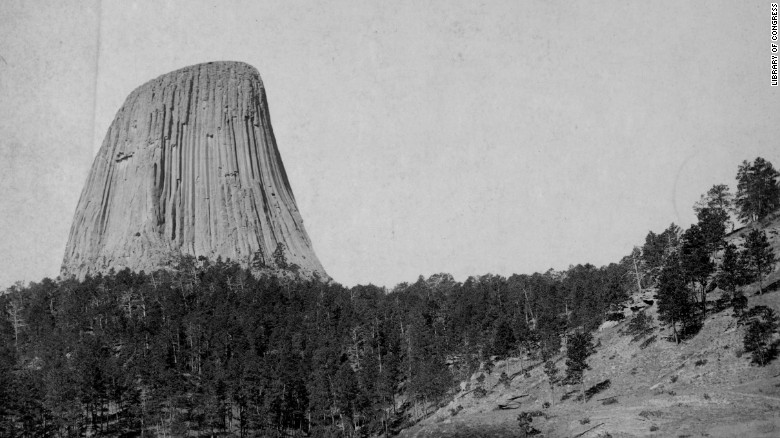 Devil’s Tower in Wyoming became the first National Monument under the 1906 Antiquities Act.

Photos and paintings from Ferdinand Hayden’s 1871 expedition to Yellowstone, which included photographer William Henry Jackson and painter Thomas Moran, convinced government officials and the public of the need to protect this national treasure.

Those images paved the way for Yellowstone to become the first national park in 1872.

There was no money allocated to Yellowstone to hire staff or protect the land, although the need didn’t really arise until the Northern Pacific Railroad’s tracks to the north entrance of the park were completed around 1883.

Congress made it even easier for future presidents to protect natural resources through the passage of the Antiquities Act of 1906, and President Teddy Roosevelt — a Muir ally — proceeded to add to the country’s protected list of natural resources.

Yet it was probably Muir’s great failure at Yosemite that pushed through the creation of the National Park Service.

For 12 years starting in 1901, Muir led a Sierra Club campaign at Yosemite National Park to stop theHetch Hetchy Valley from being filled by a reservoir. Congress ignored the opposition in 1913 and passed legislation allowing the city of San Francisco to build a dam and reservoir that flooded the valley to supply its water needs.

The threats to protected national parks became clear in the aftermath of Hetch Hetchy (which still supplies water to the Bay Area). The American Civic Association, the National Geographic Society and others supported the campaign to create a single agency to oversee and protect the parks.

One powerful ally was wealthy Chicago businessman Stephen Mather, who complained about mismanagement of the national parks to Interior Secretary Franklin Lane. Lane challenged Mather to join the department and do something about it, which Mather agreed to do.

On August 25, 1916, President Woodrow Wilson signed the Organic Act creating the National Park Service, which became responsible for protecting the existing 14 national parks, 21 monuments, two reservations and those yet to be established. 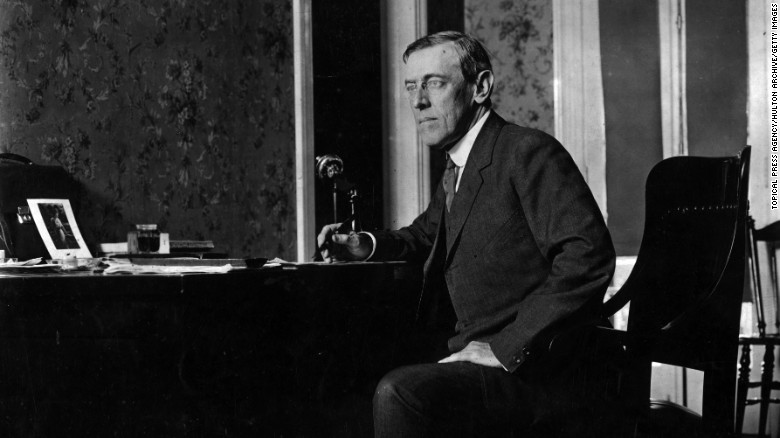 Woodrow Wilson, the 28th President of the United States of America, signed the Organic Act of 1916, creating the National Park Service.

Muir, nicknamed the father of the National Park Service, never got the chance to celebrate his victory. He died in 1914 at age 76.

The National Park Service was directed to “conserve the scenery and the natural and historic objects and the wild life therein and to provide for the enjoyment of the same in such manner and by such means as will leave them unimpaired for the enjoyment of future generations,” said Mather, who became its first director in 1917 and served until 1929.

Mather set the tone for a public good that would be shared by everyone who visited the national parks.

“The parks do not belong to one state or to one section,” Mather said. “The Yosemite, the Yellowstone, the Grand Canyon are national properties in which every citizen has a vested interest; they belong as much to the man of Massachusetts, of Michigan, of Florida, as they do to the people of California, of Wyoming, and of Arizona.”

“A visit inspires love of country; begets contentment; engenders pride of possession; contains the antidote for national restlessness. … He is a better citizen with a keener appreciation of the privilege of living here who has toured the national parks.”